Each year, the Grand Junction Commission on Arts and Culture invites nominations for the annual Champion of the Arts Awards. This year, two individuals were selected because of their leadership, generosity, and dedication to arts and culture, and were recognized at The Grand Junction Centennial Band‘s Christmas Concert at The Avalon Theatre on Sunday, December 9th. 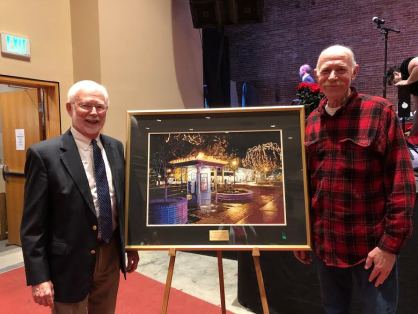 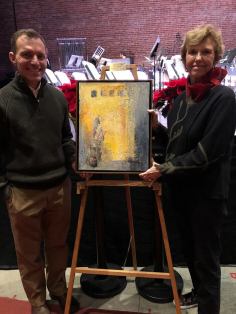 The first recipient, Lancer Livermont, was nominated by Robbie Breaux. Lancer is the board president at Western Colorado Center for the Arts as well as a MusicSpark board member. He previously served on the Commission on Arts and Culture, volunteered in several other capacities over the years, and is a great attribute to our community. He describes himself as a “man of few words” but he nevertheless works tirelessly to speak up for culture in the Grand Valley. He received Warm Glow by Joan Anderson as his Champion of the Arts Award.

The second recipient actively and financially supports art and culture organizations around the valley, including Western Colorado Center for the Arts, Western Colorado Botanical Gardens, Riverside Educational Center, and the Museums of Western Colorado. He serves on several boards including the EUREKA McConnell Science Museum, Greater Grand Junction Sports Commission, Colorado Trust and the Delta Dental Foundation of Colorado. We thank John Hopkins for valuing the importance of art and culture in our community! He was nominated by Jen Moore and he received Holiday Night by Jim Hutton.

The Grand Junction Commission on Arts and Culture is appointed by City Council and serves to cultivate an environment where arts and culture can thrive and grow.