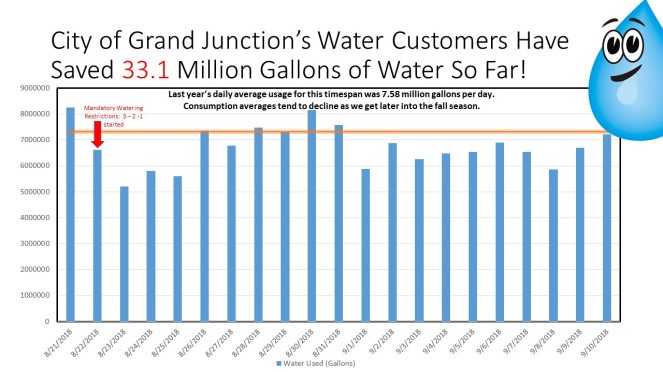 Since the implementation of those restrictions, City water consumption has improved dramatically with 33.1 million gallons saved overall since restrictions were implemented as compared to last year at this same time.

City Utilities Director Randi Kim noted, “The water savings that we have seen so far exceed what we expected. Our customers are taking water conservation seriously and we are pleased to see that. Everything that is done now to conserve will help with next year’s situation. We are hopeful we will be seeing normal winter precipitation to even further improve our conditions. We are certainly not out of the woods, but every drop helps.”

The series of events and decision points that lead up to the decision to implement mandatory water restrictions was as follows:

For additional information on City of Grand Junction Water Services, visit the web page at https://www.gjcity.org/residents/water-services/.